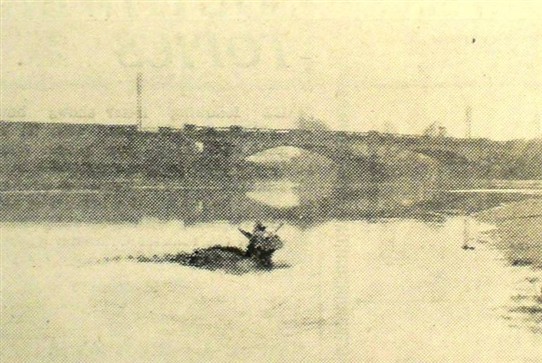 The saga began innocently enough early in 1934.  In its edition of 17th January the Newark Advertiser printed a number of letters from people who were baffled by sightings of a strange, unidentifiable creature glimpsed in the canalised section of the River Trent around Newark.

A monster with a neck as thick as a man’s waist, and horrible eyes and mouth

The newspaper sought clarification from any of its readers who cared to comment, and it soon became clear that what had been seen was an entirely new phenomenon, apparently hitherto unknown to rivermen and anglers alike.

One correspondent recalled an incident told to him by an old Newark angler who, while fishing one night near Newark’s Longstone Bridge, felt a terrific tug at his line.

Attempting to reel in his catch he wrestled with the creature for some time until its head broke water.  From that point, wrote the Advertiser correspondent, “he was so frightened at the size of his catch that he immediately abandoned rod, line and tackle…and ran all the way home to Water Lane.  He dropped exhausted and didn’t properly come round all the next day”.

He was so frightened at the size of his catch that he immediately abandoned rod, line and tackle…He dropped exhausted and didn’t properly come round all the next day.

When interviewed a day or two later, the angler simply described the creature as a monster with a neck as thick as a man’s waist, and horrible eyes and mouth.

A more detailed description provided by another local fisherman followed:  “It seemed to be about 8ft long, and a long, tapering tail lashed the ertswhile calm river into angry swirls and ripples”.

The following week, in its edition of 24th January the Newark Advertiser devoted space to an account by the keeper of the eel stakes on the Trent near Newark.  He told of having seen an unidentified creature about 12ft in length – longer than any eel he had ever seen in the river – which created such a huge wash that it felt as if a barge had gone by.

Finally, on 7th February 1934, all these stories were given tangible proof when the newspaper actually managed to obtain a photograph of the creature near Muskham Bridge (see above).

The photographer, Mr J.D. Chambers of Newark, evidently surprised the creature as the minute it was ‘snapped’ the creature submerged and swam quickly away.  Mr Chambers and his accomplice, however, having once seen their quarry, were not about to let it get away.

The newspaper report that accompanied the photograph explains how the two pursued the creature along the river, guided by its wake, and finally succeeded in capturing it with rod and line after a great struggle.

So large was the beast, however, that they could not haul it ashore, having to content themselves with severing the head as proof of what they had seen.

A mild sensation was created in Newark then the head was displayed for some days in the window of Mr Thomas Covell’s fishmongery shop at No.12 Stodman Street.

Published in January/February 1934 at the height of the first big surge of interest in the Loch Ness Monster, two Newark residents, Mr J.D. Chambers and Mr. S. Whaley – perhaps fired by scepticism over accounts in the national press – felt the Trent was missing out.  Their inspired invention of the ‘Trent Monster’ did much to spark interest in the town in those cold, dark days of winter 1934 and even elicited several independent ‘eye-witnesses’ who, over a number of weeks, were convinced that they had actually seen a real monster.