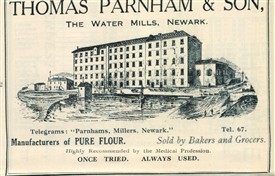 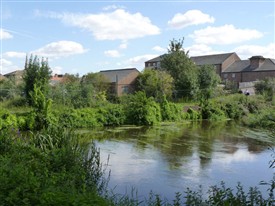 The firm of T. Parnham & Son – makers of fine ‘Excelsior’ and ‘Snowflake’ flour – was first established in Newark in 1829 when Mr John Parnham, a miller from Whatton, took two windmills in the area of Newark known as Mill Field between Barnby Road and London Road.

He also began to operate at steam powered flour mill on Barnbygate, at the junction with Whitfield Street.

In the mid 1850s John Parnham was succeeded in the business by his son, Thomas (1829-1903) who took up residence in a house adjoining the steam mill on Banbygate/Whitfield Street.

It was a period of expansion, with Parnham’s becoming the dominant flour produced in the town and with their products being sold nationwide.

Everything was going well for the family until the night of Sunday 8th August 1886 when a disasterous fire broke out in the steam mill completely destroying the stores of wheat and much expensive machinery.

There was no loss of life, although, a s a lengthy report in The Newark Advertiser noted, this was due solely to the quick actions of one of Mr Parnham’s neighbours in alerting nearby residents:-

“No time was lost by the terrified occupants of the adjacent houses [Norfolk Buildings] in seizing their clothing and making the best of their exit to a place of safety.

“Such an announcement in the dead of night might well stun the sleepy inhabitants, and some of these were so astonished as to require forcibly rousing to the danger which was at hand…”

The Newark Fire Brigade turned out to fight the blaze but with their outdated manually-operated water pump they made little headway.

The private steam fire engine owned by Warwicks & Richardsons brewery on Northgate also came to assist, but even this, with its much greater capacity, was no match for the raging furnace.  The mill was almost completely destroyed with damage estimated at around £5,000.  Parnhams were insured for only £3,800.

Nevertheless, Mr Parnham immediately negotiated terms  to acquire the use of  another large mill off Millgate owned by Messrs. Thorpe & Son.  It was this mill – which used the older (but somewhat safer) technology of water power – that became Parnhams’ home for the next 80 years.

Water drawn from the Trent  provided a consistently ample source of power to drive the mill’s three water wheels – two of which could produce 50hp apiece, with the third, the largest at 35ft in diameter with 20 blades, being capable of 100hp.

All three wheels were unusual in that they used the breast-shot principle.  the only problem they presented was if the river level rose too high, then the water wheels were rendered inoperable, meaning that two gas engines of 12hp and 60hp respectively had to be brough in to play to keep the mill running.  The gas engines, however, were not installed until 1912.