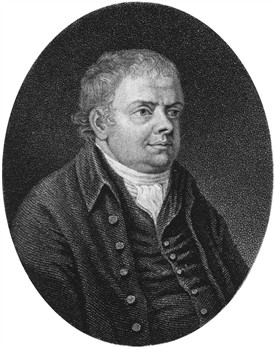 Best-selling veterinary author of the 18th century. Renowned for his books on horse and cattle husbandry.

The name Francis Clater may not be well remembered today, but in the late 18th and early 19th centuries, books on veterinary science by this Nottinghamshire author were bestsellers – running to 30+ editions over 50 years, selling in their tens of thousands.Today he is remembered in his adopted town of Retford by the naming of ‘Clater’s Close’

Francis Clater was born at Whatton near Bingham in 1756 into a respected landed family.  As a boy he was apprenticed as a farrier to his uncle in Nottingham.

Striking out on his own, he moved to Newark where he pursued the business of farrier for about three years, and it was here – at the age of 27 – that he wrote and published his first best-seller – “Every Man His Own Farrier…. or The Whole Art of Farriery Laid Open: containing Cures for every Disorder, that useful animal, the Horse, is incident to“.

Title page from an 1806 edition of Francis Clater’s first book, published by A. Tomlinson in Newark.

It was printed and published in 1783 by the Newark printer, A. Tomlinson.

At the age of 27 Clater’s assertion that this work was “the result of many years’ experience” might seem something of an exaggeration, yet by 1791 the book was already into its fourth edition.

To his audience, the big selling point was that Clater presented his cures plainly and succinctly, without much of the “superfluous historical romances” (‘flowery language’) which he considered marred other books on the subject.

Even so – or probably because of – he encountered a degree of opposition from other professional farriers who considered their knowledge compromised by thus making it available to anyone for the price of a book.

Conditions for which Clater recommended his various treatments and concoctions included ‘poll-evil’, ‘lampas’, ‘the barbs’ and ‘windy colic’.

By the time Everyman his own Farrier was published, Clater had moved to Retford, where his set up as a Chemist and Druggist  and veterinary practitioner (possibly in c. 1783/84) and remained for the rest of his life.

His first premises were on Newgate (now Grove Street), moving a little time after to a more prominent location on the west side of Retford’s market place.

It was in Retford that he wrote a sequel to hist firs best-seller, “Every Man his own Cattle Doctor” which was published in 1810.  Building on a reputation established with “Farrier“, this second book became another best-seller, with, eventually, over 30 editions being published.

Later editions were produced under the editorship of Francis’ son, John, and the eminent vetenarian, William Charles Spooner, meaning that, with continued updating as veterinary science developed, later editions tended to less and less to Clater’s original text.

Nevertheless the series continued to sell well, with editions being published well into the twentieth century.  They were also widely circulated in America.

Francis Clater had become one of Nottinghamshire’s early Wesleyan converts, possibly during his time in Nottingham or Newark.

He and his wife, Ann, are listed are listed on the earliest surviving Methodist List for Nottinghamshire (from 1788) and when a new chapel was built in Retford on Spa Lane, Clater was one of the original trustees.

Upon his death aged 67 in 1823, Francis Clater was accorded the unusual distinction of gaining permission for burial within a Methodist church.

He was buried beneath the new Wesleyan Chapel in Newgate (Grove Street), Retford, which had been opened that same year (and which, of course, had been the same street in which Clater’s first business had been established 40 years previously).